A lot has happened since I last posted.

My back started giving me trouble, oh mid-January, making everything worse.  Too much sitting on planes, trains, and automobiles!

The last part of January, I was in Wisconsin mostly.  It was rainy, so--being January--it was not so cold (low 40's), which is still too cold to walk outside.  If I could run, I would have.  My first ultra was a 55k in the southwest of England, up on the moors.  It was 50 degrees and raining at the start and rained most of the time, staying in the 50's the entire race.  Running in the rain is okay.  Walking is not.

Just before going to Wisconsin, I found a book (or it found me, which I think is the case a lot of the time) about sciatica and piriformis syndrome, Sciatica Solutions, by Loren Fishman, MD and Carol Ardman; which led me to another book by the same authors, Cure Back Pain with Yoga.


I am now deep into yoga...  and I believe it is helping.  Several years ago, I started to do yoga and loved it. But I stopped going to the class and eventually quit altogether when my hip issues started to get really bad. I always thought I would get back into it once my hip was better.  Well, Dr Loren says I should start where I am and it will help relieve the pain.  And you know what...   he is right...  it is helping!  What is kinda funny is that when I last posted, I quoted the Buddha (who practiced yoga); and my "Quote for the Week" was "Do what you can, with what you have, where you are"...  kinda what the book says to do with the sciatica pain.  Was I getting some premonitions?  I don't know...

Also, I saw my ortho doctor last week.  He evaluated me again and we talked.  He doesn't think there is anything wrong in the hip joint; it's the hip/hamstring muscles and the herniated lumbar disks.  I told him I was starting a yoga practice, and he said that was good.  And he prescribed more physical therapy.

So, I started back this past Tuesday at the same PT, and again today.  I am doing about 20 minutes of yoga daily and it is really wonderful; I am looking at some yoga studios in the area to go to.  The weather here in Florida has been just beautiful and I have been going for long walks... down A1A and in the park.

And then there's my grandson, Jack...  I have gotten a lot of time with him lately, going for walks and to the park, where we swing and go down the slide and bounce on the teeter-totter.  That's the best! 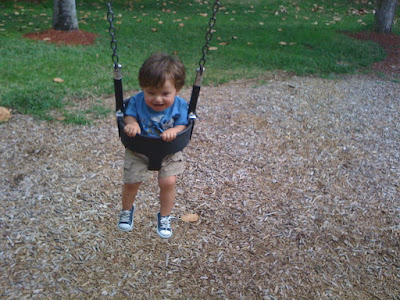