There are so many awesome athletes running in Saturday's Olympic Trials, all with such interesting stories behind their running success.  160 men and 227 women will be competing, and I have been having so much fun reading about them!  The MOST AMAZING athlete IMHO is Caroline White. 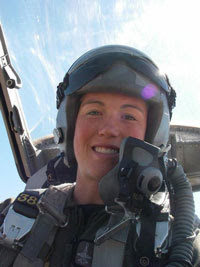 On the track and field team in high school, instead of running, Caroline was a pole vaulter.  After high school she entered the Air Force Academy (a lifelong childhood dream of hers was to fly airplanes), continued pole vaulting for a while, but quickly joined the Air Force Parachute Team, subsequently parachuting out of an airplane more than 600 times (!!) and becoming the jump master.  At the Academy, Caroline was not only an athlete (pole vaulting, jumping out of airplanes, scuba diving, mountain climbing...), she was also a Rhodes Scholar finalist.

After college she decided she wanted to try running a marathon, found herself a training plan from Runner's World and began training.  Two months into training she decided to enter Coeur D’Alene Ironman (what the heck! why not!), won her division, then went on to do Ironman Hawaii, placing 12th in her division in the Ironman World Championships!

The Philadelphia Marathon was her first marathon, and after an amazing 3:09 finish there, Caroline got herself a coach to help her with her next goal:  qualifying for the Marathon Olympic Trials.  And she did just that at the Twin Cities Marathon in October 2009 with a time of 2:45:21.  Working her training around flight schedules (12-hour days beginning before 5 am), she continued to compete, running and winning at various distances (Houston half marathon, Armed Forces Cross Country Championships, to name a couple).  In October 2010, Caroline's flying dreams came true when she received her pilot training assignment:  the F-15 fighter.  Only 12 pilots are chosen each year for the F-15 and very, very few have been women.  Then last year she took on the Boston Marathon, toeing the line beside the Kenyans and Kara Goucher, and finished 20th overall, 5th American, in a time of 2:37:30! 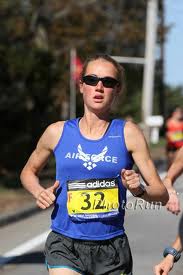 With both men's and women's trials being held in Houston this Saturday, this is a first--first time men's and women's have been held in the same place and on the same day.  It will be an exciting morning for those 387 athletes in Houston...       and I am so rooting for you, Caroline.  You go, girl!