Using Caffeine as an Ergogenic Aid

In previous posts I have talked about how to optimize your training by:
You can also use certain ergogenic aids to your advantage in training and racing.  And, no, I am not suggesting you do anything illegal.  Ergogenic aids include anything you use externally to enhance performance, and include nutritional, physical, psychological, physiological, and pharmacological aids.  Examples include:
Here I am going to talk about the use of caffeine as an ergogenic aid.

Studies on caffeine used as an ergogenic aid over the past 20 years have shown positive benefits for endurance exercise in both time trials and time to exhaustion.  Though fewer studies have been done with caffeine and high intensity exercise, some recent research has shown positive effects on activities lasting one to seven minutes resulting in fatigue, i.e. cycling, treadmill sprinting, rowing.

Caffeine is a drug, it is a stimulant, and used to be on the banned list of the IOC (International Olympic Committee).  It was removed in 2004, likely because the amount needed as an ergogenic aid is 5/6mg/kg body weight, which produces urine values of caffeine that are less than what the IOC limits were.  Caffeine stimulates the central nervous system, and the effect on the cerebral cortex enables us to think clearer, concentrate better, and perceive exercise as easier (lowering Rate of Perceived Effort - RPE), thus allowing us to feel less fatigue.

In endurance events, caffeine ingestions releases fatty acids from adipose stores to be used by the working muscles sooner than normally would happen.  This delays fatigue by sparing limited amounts of muscle glycogen.  During intense exercise, caffeine promotes release of calcium ions in the muscles to enhance muscle contractility.

Research shows that positive benefits occur when the dose is about 5-6 mg/kg body weight, but no further advantage at doses over 6 mg/kg body weight.  There is some evidence of benefit at 2-4 mg/kg body weight.  Studies also show that peak concentration is seen in the blood at 60 minutes after ingestion of caffeine, so you should take your caffeine about an hour before performance. 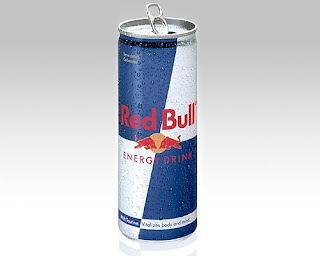 Many of us take our caffeine in the form of coffee (yes please!), but research has shown that, for some unknown reason, caffeinated coffee is not nearly as effective as pure caffeine in producing the positive ergogenic results.  BUT, the energy drink Red Bull DOES produce the same results as pure caffeine in capsule form.


Takeaway - Caffeine may be used for better performance in both endurance and high intensity exercise, taken in either capsule form or in the energy drink Red Bull, and ingested about an hour before your exercise activity.
Posted by Joy at 9:58 AM

Email ThisBlogThis!Share to TwitterShare to FacebookShare to Pinterest
Labels: caffeine