It's 2010... is that twenty ten, or two thousand ten?
However you want to say it, here's to a fantastic new year!
Talk about a white Christmas--we had 21" in Sioux City! It was not so cold--mid-twenties--and I got out for a couple 45-minute walks around the neighborhood as it was lightly snowing.
Snow in Sioux City on Christmas Day 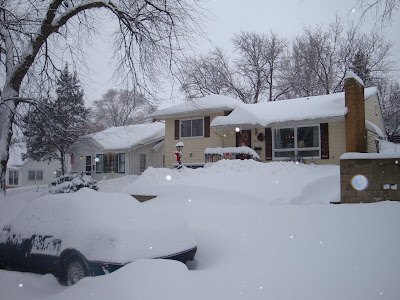 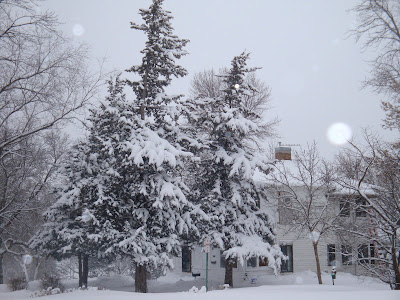 It was quite wonderful, actually... quiet, where all you hear are your footfalls, slightly muffled, and the occasional snowblower or shoveler. And as the ultrarunners say, "There is no such thing as bad weather, just inappropriate clothing."
We did get out on Saturday for an afternoon/evening of family bowling, pool, and darts. John's 84-year-old mom bested all the other women in bowling (me, John's sister Jana, and her daughter Amy)!
John's nephew Scott (who ran the NYC Marathon this past November--I was so jealous!), gave me as a Christmas gift the book Unthinkable, by Scott Rigsby. It is his story of how he has turned a terrible accident in which he lost both his legs, into his life's purpose of helping other amputees deal with their loss. Scott battled depression and alcohol while trying to finish college and start a career. After much searching, he found what he sees as God's purpose for his life.
Scott was athletic before the accident (though not endurance), and eventually stumbles upon participating in triathlons as something he can do--and greatly enjoy--with his prosthetics. He decides to train for and complete an Ironman as a way of showing others that they, too, can do the "unthinkable."
The story starts with the day of Scott's accident, shortly after he had graduated from high school. He and two buddies were riding in the back of a landscaping pickup truck, on the highway back home after a day's work. A semi-trailer truck tried to pass them and caught the wheel of their trailer. Scott was thrown from the truck, dragged as he tried to hang on and, when everything stopped, ended up with his legs under the trailer. His right leg was amputated immediately, but they saved his badly mangled left leg, and Scott went through more than twenty surgeries over the next twelve years to try to regain normal use of it. It never was right and prevented Scott from being able to participate in the sports he wanted to do. He made the decision to have it amputated because he felt he could function better with two prosthetics than with the bad leg and foot. And he was right! He was fitted with two prosthetic legs and his balance was so good that, when he was wearing pants no one knew he had no legs. Pretty amazing!
Along with the physical injuries, Scott suffered a traumatic brain injury from the accident, which greatly affected his ability to concentrate and control his emotions. This made trying to get through college a tremendous effort, but he did graduate. With his new prosthetics he finds he can actually run for short distances. He learns about the triathlon craze, decides that that is what God wants him to do, and so goes about training for and completing the Hawaii Ironman.
Scott writes in a very honest and sincere manner with bits of self-deprecating humor in just the right places to make the book a joy to read. I very much admire him for all he has and continues to accomplish.
Video of Scott Rigsby, double amputee...

I am here in Wisconsin till the end of the week, and it is cold! It's about 16 degrees right now, but the wind chill (wind from the northwest at 20 mph) makes it feel like -1. Too cold! I have been getting some time in on the elliptical every day since we got back from Sioux City--boring--but I just can't get myself to go walk outside. I will be glad to get back to SoFL! (Sorry, John!)
View More Free Videos Online at Veoh.com
Posted by Joy at 8:33 AM