I pulled out my Boston Marathon book tonight--Hal Higdon's 1995 Boston.  It tells the history of the running of Boston, with all the great runners and great races there.  I reminisced about the years I ran Boston, and the time I met Boston Marathon great, Johnny A. Kelley.
In early 2002, I ran, and won (women's overall) a 50k over in Sarasota, the Knight Trail 50k.  Johnny Kelley and his wife used to winter in Sarasota, and the race directors had persuaded them to join us for the post-race picnic they put on for us.  He was there to greet us as we crossed the finish line.  His running advise to me?  The Finns told him to "start your workout with 300 yards or so of fast walking, then jog at an easy pace and slowly build up to your faster running."
2002 Knight Trail 50k -
Me, Johnny Kelley,
& Men's Winner Danny Ripka 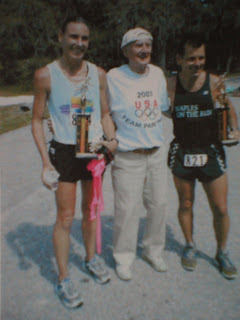