Cold in Wisconsin, Two-a-Day's, and the Beach

It's Sunday and I am in Wisconsin, flew in from South Florida on Friday. It's cold here, three in the afternoon and only 39 degrees! SoFL has had record high temperatures the past week (low 90's) so this is taking some getting used to! I did go for a short run yesterday morning, dressed appropriately (for me, anyhow)--two long-sleeved shirts, tights, hat and gloves. I came upon a young woman running in Vibram FiveFingers, and I just had to talk to her about them! She's been wearing them a few months, she said, and really likes them. She was doing some quarter mile intervals on the pavement in them. I didn't get to talk to her long because her watch went off signalling her to do another one. Pretty cool!
This past week in Florida, I did more trail-running in the park in mine, plus a few barefoot beach runs. And last Sunday morning I met up with Jane after she had run about 40 minutes, to finish her long run with her. Her schedule called for a run of two hours and forty minutes. We had planned that she would run an hour before I joined her, but she got a late start. I did not really know how much I was going to run--was just going to run how I felt. Well, I did the rest of the run with her, a little more than two hours, which was around twelve and a half miles or so for me. It was slow, but it didn't matter. She just had to get the time in on her feet, I just wanted to run as long as I could, and we both enjoyed the time spent with each other.
Back in the "good old days" when Jane and I were doing our hard marathon training, we would do "two-a-days" once a week (and occasionally twice a week) to get our mileage up. We would do seven miles at 5:30 in the morning, get our kids off to school, go to work and work all day, then meet again at 5:30 that evening for another seven miles. We typically would have done a speedwork session on Tuesday with a total of ten to twelve miles, recovery run on Wednesday, a two-a-day (seven in the morning and seven in the evening) on Thursday, off Friday, then a 20-mile long run on Saturday. Those were the good old days!
On Thursday, I did a two-a-day: four miles in the park in the morning in my "froggy feet" (that's what Jane has dubbed my Vibram FiveFingers), then another four miles on the beach late that afternoon. Not exactly like the old days, but the same idea, I guess--getting some more miles in but giving your body a little recovery time in between.
The beach was littered with "moon jellies," a kind of jellyfish that's very common in SoFL. They get stranded on the beach, and the waves can break them into pieces.
A moon jelly on the beach... 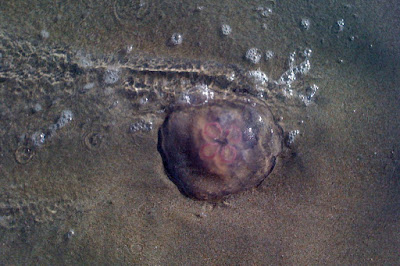 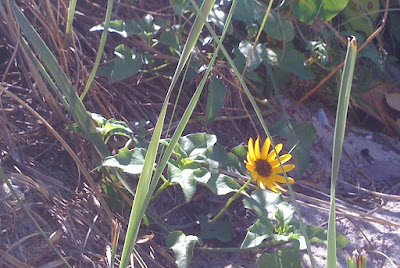 I didn't bring my "froggy feet" to Wisconsin. I run mostly on a paved "rails-to-trails" path, and I don't think I'm ready for pavement in them. And, besides, the forecast here is continued cold and rain this week. I'm a Florida girl--rather run in heat and humidity than cold rain any day! So, I'll probably do a little less running, more gym work for a while.
Posted by Joy at 3:32 PM