Okay, so this is about the best thing that's happened in a loooong time in my running.
First of all, before I had surgery on my hip, I would run on the beach barefoot at least once a week. Let me tell you something... my most very favorite place to run is the beach. I love running on the beach! Well, I have been avoiding running on the beach because I figured it would be terribly stressful for my hip and I should not be stressing anything. Then yesterday, I decided I would run on the beach, because, I mean, what the heck, after all the babying I've given my hip/leg... I still hurt.
So, yesterday I did five wonderful miles on the beach--it was great!
My favorite place to run... on the beach 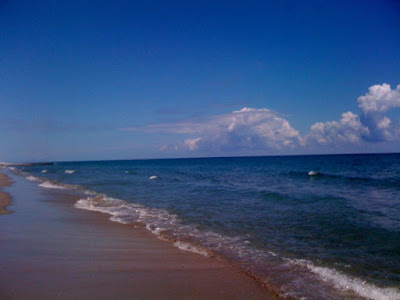 I got the Vibram FiveFingers... and they are just fantastic!!
Ran three miles in them over at the park on the trails--no problem, and I think... I think... because running in them forces me to land midfoot--or even forefoot--that my body stays directly over my feet as I run. I take very quick, short strides, and my pace is slow, but I think it's correcting my form, and eventually the pace will just naturally pick up. It feels like you are barefoot; that is, you really don't feel them on your feet. They protect the bottoms of your feet, but you do feel any bumps you land on. I did not do too much on pavement; will work up to that.
My Vibram FiveFingers... ugly! but very cool!! 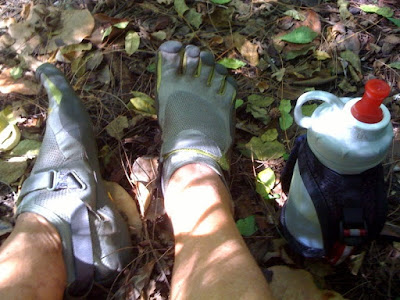 Growing up, my childhood was actually perfect for this running that I love to do. I grew up in the Midwest, and as soon as school was out for the summer, we were barefoot. We got a pair of flipflops (we called them "thongs" back then) and a pair of white canvas "tennies" (Keds tennis shoes) that we would wear if we had to wear shoes. But, mostly, we played and went everywhere barefoot. All the kids did. Our days were spent playing outside--jump rope, hopscotch, riding our bikes, swimming at the local pool... and at night we played running games--tag, freeze tag, kick the can, and the like. All barefoot.
When I first began running, it was on the beach, barefoot. I was 37 years old, and enjoyed long walks on the beach. One day I just decided to run a little bit... and that was pretty much it. At the time, I was walking about three miles a day (not just on the beach). I would run as far as I could and then walk; then run again, and walk. After a couple months I could finally run the whole three miles without walking... then I felt I could run forever. I continued my beach runs at least once a week throughout my years of training.
My very first ultra was a 55k in England in 2000, the Dartmoor Discovery 55k. Down in southwest England, the moors are the setting for the Sherlock Holmes books. It's very bleak up on the moors--cool, misty, and kind of barren; not the lush green you think of when you think of the English countryside. And quite hilly. Long hills, steep hills. As there are no hills--none!--in South Florida, I decided that running on the soft sand of the beach might help build strength to help me run those hills in Dartmoor. I worked up to running 10 miles on the sand, then putting my shoes on and running up to the bridge over the intracoastal and running back and forth across that for about an hour or so.
Race day was the first week of June, 52 degrees and raining. I stood on the starting line with a hundred other runners, mostly men, thinking, "What am I doing here?" But, you know what? Once you start running, it is what it is. You are doing what you love to do, and whatever comes your way--be it the rain, the cold, the steep uphills, the long downhills, or... the wild ponies and the sheep grazing along side the road, and the sun coming out down in the clean little villages with the people standing on the side clapping and telling you, "Well done!"--you take it all in... and that's joy...
Photos of Dartmoor National Park And then there was my first 50-miler up in Central Florida in the Withlacoochee Forest on the Croom Trail in April of 2002. A few weeks before, I had run a trail 50k over in Sarasota. There were several stands of water (knee-deep) on the trail that we had to wade through (couldn't go around, saw palmettos and such on both sides), as there had been lots of rain in the week before the race. The course was an out and back seven times, and everyone's shoes were constantly wet. (Stay with me here; there's a reason I'm telling this.)
I won the women's overall in that race, and was met at the finish by none other than 92-year-old Johnny Kelley of Boston Marathon fame!! He and his wife used to winter there in Sarasota and somehow the club that put on the race had persuaded them to come. After the race, I washed my shoes, set them out to dry, and did not wear them till I put them on that Saturday morning of my first 50-miler. Boy, was that stupid! At the time, I was in the habit of getting to races at the last possible minute before the start. I had put my shoes on in the car on the way to the start, which was at 5:00 am. When I put my shoes on, I had to loosen them up to get them on (they were kinda shrunken from being washed in the washer), and tied them up, not giving it a second thought. I (stupidly) did no running in them before the start of the 50-miler. I did not realize that they were too loose on my feet. Getting to the start area, I got all my stuff ready (water bottle, Gu's, s-caps, Clip, aspirin), went to the bathroom a couple times, and we were off and running.
The Croom Trail in the Withlacoochee Forest in Central Florida is hilly and sandy. Not terribly big hills, but hills just the same, and sandy. Well, with my shoes kinda loose on my feet, on the downhills my feet would slide down and my toes would bang against the ends of my shoes. The 50-miler is three loops around the trail, with several series of ups and downs each loop. After a couple loops of the "downs" my toes started to really hurt. That's not so unusual; everyone who does marathons and ultras gets bruised toes. Well, then they started to really hurt, and it got so bad, that I just couldn't run anymore, hurt too much. I kept trying to run and couldn't; walked, tried to run again, and couldn't. Finally, I sat down on the trail and pulled off my shoes. My toes were a bloody mess! On inspection, I found that five of my toenails were actually completely off the nail bed, and three others were just hanging on. But, what else I found was... that it was such a relief not to have my shoes on!
I knew I was not far from the next aid station, so I picked up my shoes and started running. It felt so good to have my toes free! It was about a mile to the aid station. When I got there, my feet were filthy, a mess! I sat down in a chair and the woman who looked at them asked if I was going to quit or keep going. It was another seven miles to the finish, and she said it wouldn't do any good for her to try to clean them up if I was going to keep going.
As I had not been running very much over the last six or seven miles, I actually felt pretty good... so I decided to keep going, barefoot. The Croom Trail is mostly sand and soft dirt; no rocks, but there are parts that do have lots of roots. Those were the killers--catching a toe on a root! But I finished, and won the women's masters title! Ran the last eight miles of my first 50-miler barefoot!
The Croom Trail in the Withlacoochee Forest... (The photo at the bottom of my blog is me on the Croom Trail.)
Posted by Joy at 4:57 PM