Did you watch it?

It was interesting...   though I think these kind of TV interviews are too short and opinionated to show what the person is really about.  But on the other hand, it might spark an interest in looking further into the person or the subject (which it usually does for me),  so I think they are worthwhile.

Raven says he began running out of anger; as a songwriter back in the 70's, something happened to really piss him off and a friend told him to run and he'd feel better... and it made him feel so much better that he eventually made a deal with himself on January 1, 1975 to run eight miles every day that year.  Well, 37 years later...  he has a strict routine where he takes, I think it was, 20 steps outside his home to the sand (South Beach), at 5 pm every single day to start his run, running the exact same 8-mile route every day.  He also now has a following, quite a few people regularly run with him, and he has given each one a nickname, each of them knowing how many runs they have run with Raven.


Catra Corbett, aka Dirt Diva, was addicted to speed and alcohol some years ago and credits ultrarunning for turning her life around.  Her thing is 100-milers.  She also likes tattoos, piercings, coloring her hair funky colors, and wearing running skirts (yay--I like running skirts!)  She has such a sense of gratitude for everything, yes everything, you can't help but be inspired by her and just love her!
Catra Corbett 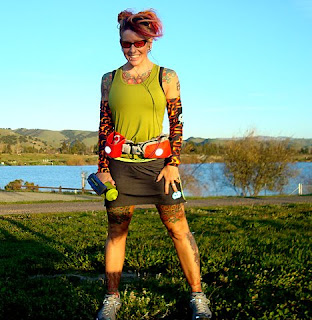 Marshall Ulrich..  where do you begin to talk about this ultrarunning legend?  He says he started running at age 30 when his wife died.

An ultrarunner, mountaineer, and adventure runner, Ulrich, now 58, has completed 123 ultramarathons (averaging over 100 miles/ultra), and has summited the highest mountain on each of the seven continents.  In 2008, he ran across the U.S., San Franscisco to New York City, 3,063.2 miles in 52 1/2 days--that's an average of 62 miles a day.  He's won the Badwater Ultra (run across Death Valley) four times, completed it 17 times, and done it solo--carrying all his gear, food, and water in a specially made cart he pulled behind him.

Ulrich gives motivational talks, and through his running has provided over $850,000 for non-profit charitable organizations. 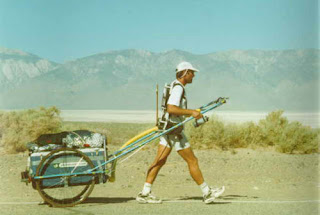 All three said in the interview that if they didn't do what they do they would die.
Posted by Joy at 2:22 PM