From The Washington Times (http://www.washingtontimes.com/news/2011/oct/30/marine-corps-marathon-ware-wins-in-a-runaway/?page=all#pagebreak):  On a sunny but cold Sunday morning, the Marine Corps Marathon had some surprises in store.  Chad Ware, 27, surprised everyone but mostly himself with a 2:19:16 finish for the win.  No one has run that fast at Marine Corps since 1997.  Before today, Ware, who has been running since he was 17, ran his fastest marathon in Chicago 2009, with a time of 2:20:47, but stomach issues have plagued him throughout his marathon career.  He says that he almost did not run a fall marathon because of his stomach problems. 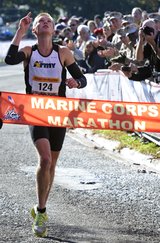 Ware also says that it has been a dream of his to qualify for the US Olympic Marathon Trials (men's qualifying time is 2:19 or better), not thinking that today would be that day.  But he stayed on pace with the lead group through the halfway mark, and by 19 miles broke away from two top Ethiopians, Emiru Mekonnen and Temesgen Ilanso, going on to the 2:19:16 win.

Tezata Dengersa, born in Ethiopia but a citizen of Turkey, won in the women's race in 2:45; that's after winning the Army 10-Miler earlier this month, AND winning the Baltimore Marathon two weeks ago in a time of 2:37.  She's thinking of running Richmond in two weeks, or Philadelphia in three.

Former Marine, comedian, and "Price is Right" host Drew Carey ran his first marathon with hopes of breaking four hours, but had problems with his quads cramping up around 15 miles and finished in 4:37...   still a respectable time for a first marathon..   and he says he'll be back!
Posted by Joy at 8:09 PM